Join Maranatha and Grace Adventures Next New Years’ for a family fun weekend! 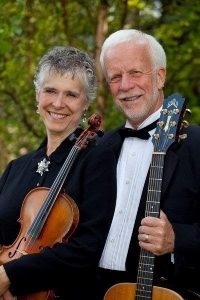 Good News!  Jesus has done it all and we are free in Him!  We’ve got lots to celebrate so let’s get started.  Let’s invoke God’s gift of music with Michaella Jacoby’s violin, Jerry Jacoby’s voice and guitar and all of our voices raised together along with God’s gift of laughter.  When the message of His Grace rings out there is much to be joyful about!  Growing up in Detroit and Southfield, but now residing on a gentleman’s farm South of Jackson Michigan, Jerry Jacoby continues his work as a humorist, songwriter and motivational speaker for children and families with 5,000 events under his belt in schools, churches, and camps, including Austria & Poland.  Michaella Jacoby has been married to Jerry for 42 years with 2 children and 5 grandchildren and is a professional violinist, having played in orchestras for over 40 years as well as in the pit orchestras for such performers as Tony Bennett, Peggy Lee, Perry Como, Johnny Mathis, and Paul Williams.  Together, Jerry & Michaella have a blast providing good, clean fun with their interactive music and humor.  But they both admit that’s just the stuff that sounds good in a blurb.  Their real love is Jesus Christ.  In the long run, He’s what’s important and it’s really freeing to be real with each other in the reality of His Grace!

Ever since he was six years old, David Pendleton has had a passion for ventriloquism and performing. Today, he’s a seasoned professional, an in-demand comedian, and expert ventriloquist whose unique brand of humor has won audiences over throughout the world. David will not only amaze you with his ability to make you believe that anything can talk, but his comedy act will also keep you laughing from start to finish.

David brings to his show a cast of comedic characters including lovable but blunt Aunt Tilly, a 94 year-old spinster; the classic quick-witted trouble maker, Mack Elroy; the dopey yet adorable hound dog, Buford; and the slightly misguided albino vulture, Vern. Of course no show would be complete without a few surprise appearances from members of the audience as well!

David’s high-quality, family-friendly humor has mesmerized audiences the world over. Whether it’s a convention or conference, a corporate event or a cruise, David Pendleton makes it a night to remember!